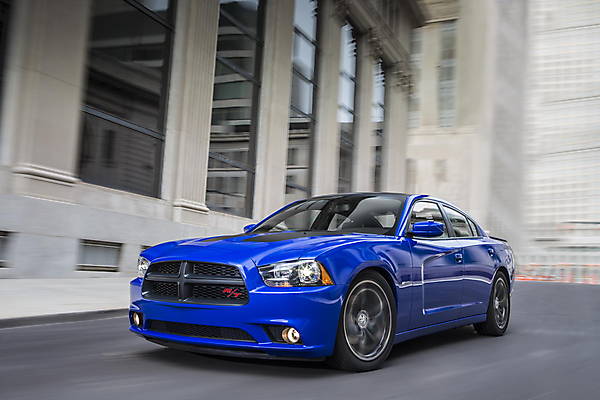 As before we have already presented you some information about a new-old model of the Dodge Charger Daytona, today we are going to provide you with more information about the interior design of the new model. Inside, new 2013 Dodge Charger Daytona will be finished in a luxury style. The instrument panel and transmission tunnel are done in a dark brushed aluminum, the same color was also used for the covers of the sports pedals.

In addition to that, all of Daytona will be equipped with the eight-inches touch screen from the Uconnect multimedia system and 552-watt sound system with ten Beats Audio speakers. Special model of Dodge Charger is also different from the usual Charger sports seats with new heating and ventilation, with blue interior stitching, piping and an embroidered inscription of Daytona on the backside of the seats. And in the packages of Daytona R / T Road & Track there will seats made of the black-leather or suede cover from Nappa.

Completes the image of the car the Daytona sign inscribed on the front panel in the cabin with a unique number of this machine of the limited and exclusive edition. It should be made clear: t is planned that only 2500 sedans of this redefined version will be released to the market. For U.S. dealers Dodge Charger Daytona model goes in the first quarter of 2013. Biglend Reed, director of the Dodge brand, said that this redefined modern muscle-car perfectly combines the heritage, performance and value of the brand. The latter has already been declared. For Dodge Charger Daytona R / T the company is asking $ 32,990, and for the Daytona R / T Road & Track – $ 36,495.