At the 2016 SEMA Auto Show, Dodge Company has brought a forced concept version. Dodge Durano Shaker Concept has got a set of modifications and a lot of unique decisions, which allow to pose a car as a worthy rival of Mercedes-AMG GLS63.

During the presentation, FCA and Mopar designers noticed that this SUV borrowed few elements from Charger, Viper and Challenger model. Under the hood of a show car, there is installed 6.4-liter Hemi V8 engine. It will be aggregated with an updated eight-step automatic transmission. The list of other technical specifications includes a vented hood, powerful brakes, and exclusive 22-inch satin black wheels, as well as a more aggressive body kit, different grille, rear diffuser and twin pipes with a sports exhaust system. 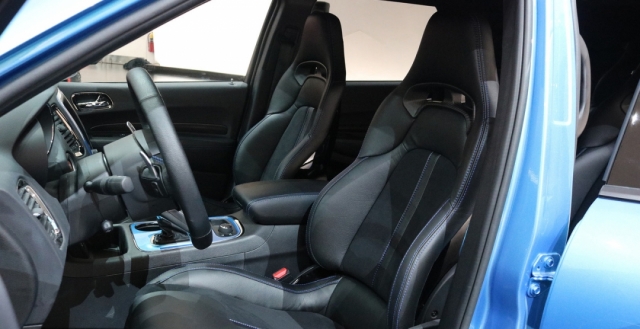 Leather seats inside of the forced car photo

The exterior changes flow into the interior ones. Inside of the crossover concept, there are installed the seats with leather trim, flattop sports steering wheel, Mopar accessories and others. The company’s representatives did not say any information about the production version of the concept SUV. However, earlier the manufacturers said about their plans to launch a charged Durango SRT.