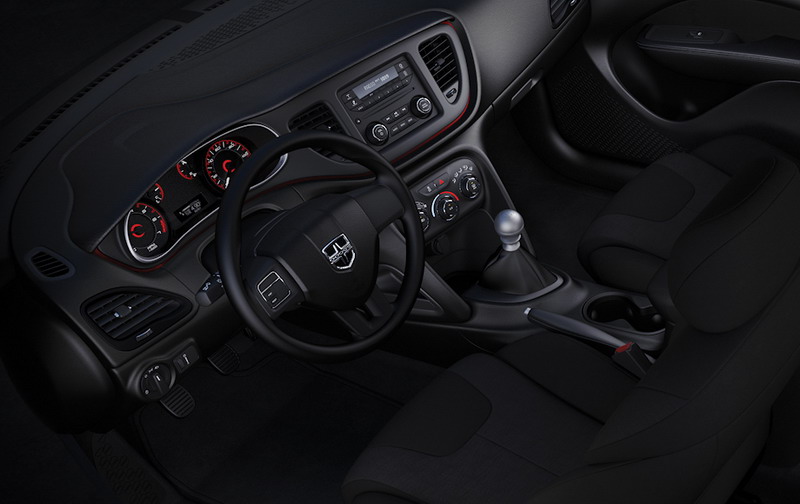 As we all are aware about the greatest novelty of Dodge brand in the image of the new compact car – Dodge Dart, that is dated by 2013 year, we all can already say that we know enough about this model. However, we decided that some additional information about the optional Dodge Dart modifications is needed, as usually when discussed, only the base version comes up.

Dodge Dart is available with six different (levels) configuration variants: SE, SXT, Rallye, Aero, Limited and R / T. Though today we will look at the first three. Dodge Dart SE of the year 2013 includes a stereo system with AM / FM radio and the ability to play CD and MP3, LED tail lights, and the “denim” seat. Under the hood it is equipped with a more or less standard a 2.0-liter inline-four engine.

In Dart SXT you can see new 17-inch aluminum wheels, keyless remote door opening, advanced audio system, alarm system, changing the ratio between the width of the rear seats (60/40) with the possibility of folding, and central locking. Optionally, you can also choose from the Garmin navigation system with 8.4-inch display, rearview camera, sunroof and 506-watt audio system. A step up in the hierarchy is Dart version Rallye, which boasts a unique front and rear facing, black frame, fog lamps, dual exhaust pipes and optional black wheels Hyper. Updates include leather interior, steering wheel with audio system, cruise control and trip computer. As an option, you can choose the 1.4-liter Multiair engine.