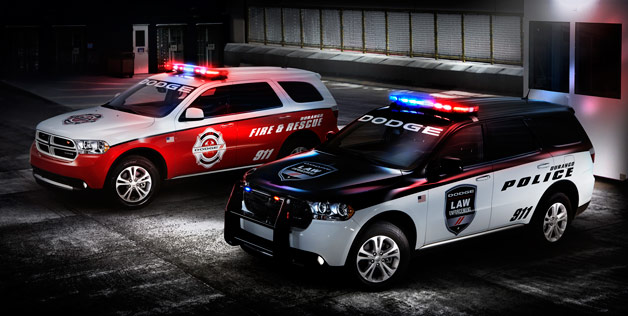 The Dodge company has recently introduced a special modification of its great Dodge SUV model with the name Durango, which was prepared for the American police and firefighters services. At this point, the manufacturer already has tailored couple of special models, which are successfully used in these forces already – the versions of two models for the law enforcement – Dodge Charger sedan and Ram pickup the 1500 model.

Police and firefighters will be able to order the Durango SUV in the rear-wheel-drive, or the version with one of two greatly powerful petrol engines – a 290-strong six-cylinder one from Pentastar with the volume of 3.6 liter or the 5.7-liter eight-cylinder engine unit from HEMI, which is equipped with 360 horsepower. New models have more powerful brakes systems, as well as the larger capacity of the batteries, upgraded water pump, and a more powerful engine cooling system, alternative system for connecting some of the additional equipment, a modified luggage compartment with a large number of storage compartments, and additional interior lighting lamps. The official shipment of these two vehicles will begin in the second quarter of this year.