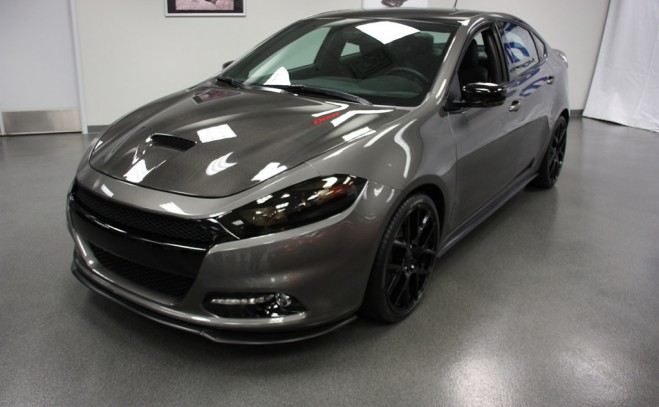 For the great tuning show known as SEMA Show, which will take place in two weeks in Las Vegas, the Dodge company has also prepared one new beauty. The company has prepared a special editions model of the new generation great small car from the American producer, the Dodge Dart, though now it will be presented in another interesting proposal vehicle known as Dodge Dart Carbon Fire.

American Dodge Dart of the new generation that is dated with the2013 year was fitted with more than 150 parts from the Mopar studio, which were prepared specifically for this compact vehicle. For those customers who are looking for a particular inspiration Mopar prepared this great package that is called Carbon Fire

Modifications included not also the upgraded core, but also some major changes on the appearance. Three-piece, prototype rear spoiler located on the boot lid increased the downforce axis of the vehicle, improving cornering behavior of the Dart and also added some lines of a more attractive exterior at the same giving car it’s new character. Stylish details also include alternative paint job and silver brake calipers, as well as new disks and some interior details and new seat leather cover.