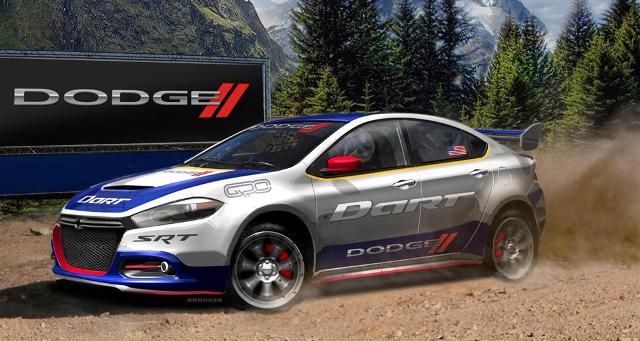 It was announced that on the latest 2012 Global Rally Cross Championship (fairly known as GRC) Series the Dodge put it all—the-way-new Dodge Dart of year 2013 rally car which was piloted by the four-times Rally Champion of America and the 17-time X rally Games Golden Medalist – the unrepeatable Travis Pastrana.

Dodge is very proud of its diversity and participation in such events as racing at Dodge is a special and integral part of their heritage. Moreover, rally racing also embodies the Dodge, and especially Dart’s, competitive spirit. Therefore for the company it was a real pleasure to announce that the next chapter of Dodge racing history starts with Dodge Dart 2013. The new Dart 2013 Global RallyCross Championship tuned car with more than 600 horsepower and the first class driver Travis Pastrana took the Dodge’s passion for performance to totally new heights.

The 2013 model production of the Dodge Dart also features the three state-of-the-art power-trains that are capable of producing up to 184 horsepower and the 171 lb.-ft. of torque and moreover, the sporty and fun to drive experience. Dart 2013 features athletic and sporty exterior, as well as world-class modern interior with quality materials, and the hi-technology and also far more than enough exterior and interior different colors and materials choices so that to fit any customer.