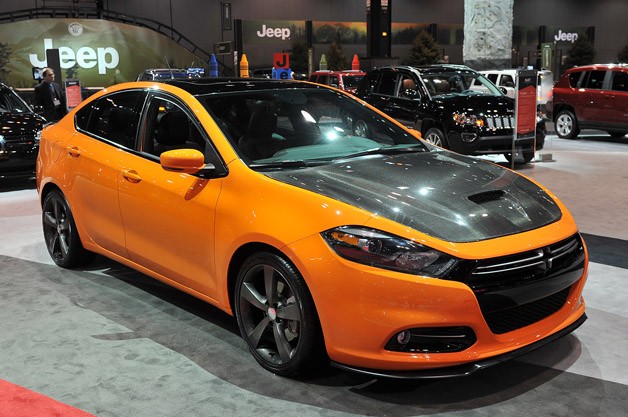 We are coming to the fans of the new 2013 compact sporty model of the Dodge Dart with great updates. Even though you might have heard that Chrysler announced last year that the 2013 Dodge Dart car will be offered with more than 150 choices of the hood and even a hundreds more times of accessories from Mopar, the official tuning studio of the company and we were able to see some of these details on the Chicago Auto Show.

Showing at once all the accessories would be for sure unreasonable, as the total number of the possible combination and thus unique cars is over ten thousand, so Chrysler decided to equip the presented Dart GT with just a few parts from Mopar, which gave the car a beautiful and elegant appearance.

The car is made in a factory color Header Orange Clear Coat, which is also suitable for shade show car – this car also features some new exterior details such as vented carbon fiber hood, front spoiler and matte black rear spoiler. Looking inside the car, you would think that red accent interior trim is part of the Mopar, but, in reality, this interior will be standard for the car Dodge Dart GT, when it goes on sale.