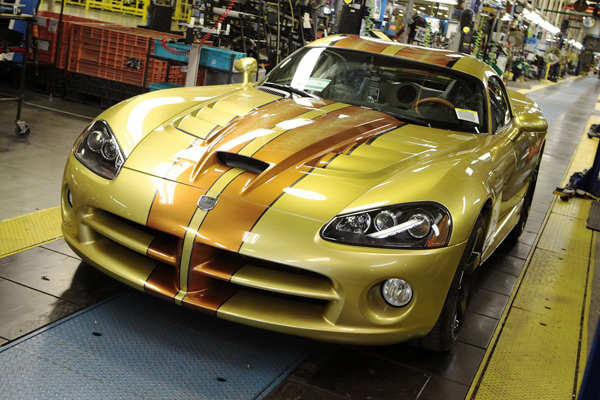 Today we are going to announce not so pleasant news for all the sport cars lovers. We ourselves are quite sda and dissapointed. Recently, just couple of days ago we learned that it is the end of a legend. Dodge Viper is not going to be produced anymore. Chrysler Group management has decided to stop production of this car – on July 1 the last Viper model rolled off the conveyer belt, which was painted with gold paint. Apparently, Americans have made all efforts to make a holiday out of this sad event.

The last car was given to the General Dodge Viper fans in the U.S. Rauch family from Texas, which owns the largest collection of Viper in the world – now they have in the garage 40 different Viper model years (and even including the ones that were produced from the year 1992). Therefore this exclusive car is gong to wider the collection even more.

It is also useful to recall that the last Dodge Viper was equipped with a V10 engine with volume 8.4 liters, and that was capable of producing a 600 horsepower. In the U.S., Viper starts at $ 93,635 for the coupe version and $ 92,885 for the roadster.